After a guy I wasn’t interested in asked me out at work and I was telling my co-workers about it a guy turned to look at me and told me I was really nasty and mean for rejecting this guy (I told him to add me on fb rather than give him my number which he had at first asked for). He told me the guy in question had “probably worked up to it all night” and that he “seemed like a canny guy”. I am ashamed to say that I immediately found myself defending my actions, I said I wasn’t looking for a relationship at the time, I’d known the guy for a long time and thought it would be weird, I stopped just short of admitting I did not find him physically attractive.

When thinking about this situation afterwards I got more and more angry with how I had felt that I should act, and what had been said to me.

Firstly, I did not have to defend my actions. I later realised this when telling my friends and seeing when the story was typed out how ridiculous it was that my co-worker was telling me I was a nasty mean person. It is ok to reject a man. We are not responsible for maintaining their delicate egos.

Secondly, it is ok to reject a guy you know nothing about personality wise on the basis of looks. Maybe if I had talked to him more then I would have considered giving him my number even though I was not physically attracted to him, maybe he had the best personality in the world and I was a fool to reject him. However a. this is unlikely, and b. I gave him my fb and if I later discover this glittering personality I’m sure I will give him my number.

The point is that the expectation that women should do exactly what a guy asks (especially if he is so nice about it) straight away and are not allowed to offer a compromise they are more comfortable with is quite frankly, bullshit and a product of a society that does not respect women’s autonomy. 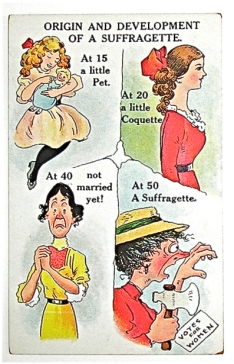 I saw this cartoon a couple of months ago on a post about how negative stereotypes of feminists haven’t really changed over the past century. The way to insult a woman who fights for her liberation is apparently still to proclaim her an ugly jealous spinster – obviously no man can love a woman who believes in social, economic and political equality for all genders.

Obviously, this is sexist trash from misogynistic men. However, I can definitely relate to my suffragette sisters’ difficulties in finding a potential partner who’s not going to piss me off or oppress me, whether in short term shags or long term relationships.

After a while of being romantically and sexually uninterested in the people around me, I started trying out the wonderful world of Tinder. 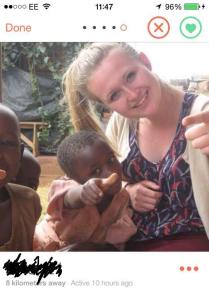 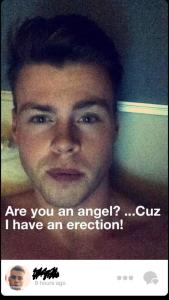 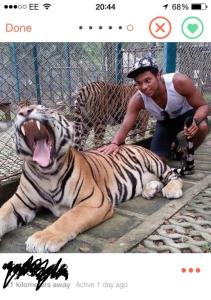 Wow. What an interesting space. One of the first messages I received was from a white guy saying “Ma nigga”. What an introduction.

And so I decided to change my Tinder profile – it now looks like this:

The idea being that it weeds out people who are most outwardly little shits. It’s also a good starting point of conversation with people who do get it – yes they do exist.

A conversation with a white lesbian who fetishes black women shocked me – I kinda knew people like that existed but I hadn’t really experienced anything on this level before.

I think it was this convo that really made me put up my guard a lot more; a kind of self-preservation technique against sexist racism.

Learning more and more about social justice movements has been incredibly important to my understanding of the world and made me a better ally to different liberation movements, but it also limits the amount of people I trust to become intimate with significantly. Though when you look at it, that’s probably a good thing – who wants to date an arsehole who doesn’t respect you or your friends?

Be proud of your high standards.