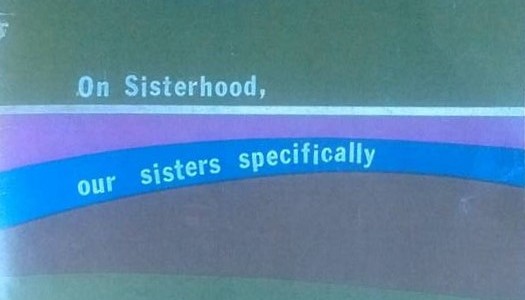 a mini – zine from across the pond

reviewed by Hufi, in Saskia’s pyjamas, in London, on a pleasant wednesday morning

This zine, I believe, has travelled from Montreal, Canada in our friend’s pocket to eventually find itself on my sister’s bedroom wall.

Emily and Kaley made this zine together and I know nothing about them – who they are or how to get hold of their zine. Google took me to goitalone-together.tumblr.com but it hasn’t been updated in a few years.

THE GOOD OLD DAYS: The rhetoric of “sisterhood” is one that’s familiar in the feminist movement. Evoking the image of sisterhood is a bit tired (and reeks a legacy of essentialism), but surely there is some value in the passé terms of days gone by. But what exactly do we mean when we talk about sisterhood? There is a way that the idea of sisterhood brings out how we’re all in this together. All too often in social movements of all stripes, we’re too quick to divide ourselves. We’re too eager to be critical without recognising the value in people’s actions in different contexts.

WE ARE FAMILY: Sisterhood is such a powerful concept because we’re all related to some pretty interesting women. Maybe it’s your cool aunt who taught you how to canoe, or your mom who showed you about the joys of gardening. Maybe it’s your cousin who first talked to you about sex or maybe it was your grandma who managed to survive despite a pile of hardships. Or, maybe it’s our sisters, who are different, not just from us, but from each other. Families are funny beasts. We don’t get to choose our families, but there is still a strong affinity among family members even if our tastes and interests vary. Is this the sisterhood our feminist sisters were getting at?

It’s not a magic eye-opening read but page 5 is my fave and brings it together for me:

“We’re interested in resisting righteousness. Our sisters aren’t perfect and neither are we. You can’t choose your sisters – they just are. But we’re sure as hell going to affirm resistance to the patriarchy in all its forms because that’s what sisters do. And sometimes we’ll let things slide because that’s how things go. It’s important to affirm and share that women respond to the patriarchy in varied and divergent ways. It’s important to affirm it because if we don’t support each other, who will?”

The zine goes on to discuss Anna and Shelby, the sisters of the authors; their differences and their sibling relationship. Special focus is given to listing the ways in which mainstream feminism/feminists (more radical) might dismiss them and all the ways in which these women have been feminists, without framing it as feminism – for example; loyalty to friends, fighting workplace harassment, being confident and assertive, helping friends access abortion and cope with abusive relationships.

It makes me think about how much my sisters have done for me, themselves and other people. I can’t talk about what makes me so proud of them, because lots of it is TOP SECRET and they would cringe if I wrote a public list of why I love them (which I do, lots).
What is most frustrating in the relationships with people you love, is having similar values but different attitudes and priorities. This translates into wider circles of friends and activists, but solidarity requires respect for difference.
On page 14, in conclusion: “Talking about our sisters is a broader project of building solidarity. Sometimes we don’t get where our sisters are coming from. Sometimes we disagree with them. But we love them regardless, and that counts for something”.